Ahuofe Patri In Trouble For Posing With ”Roo...

Now This Photo Of Nadia Buari ..

Ahuofe Patri In Trouble For Posing With ”Rooted” Man 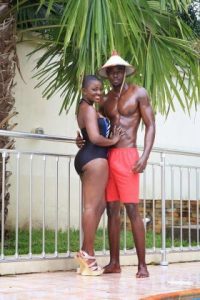 Social commentators are up in arms against rising star Ahuofe Patri for a photo which they thought was not decent enough for her kind of caliber. Ahuofe Patri has been slowly rising up the ranks of celebrity status in Ghana. She has featured in almost all of Kalybos’s Boys Kasa video series. The series which has had enormous views during the past few months has earned her a place in new tv commercials.

Ahuofe did not get a happy response when a photo was shared on one of her Facebook handles on Sunday. The photo had Ahuofe posing with a male model who looked like he had a hard on. The manhood area seem to be responding to the attractive bikini Ahuofe was wearing. One of the comments which has gunned 50 likes, stated the following

“Frank Opoku – now that u have become a star, u want to show the whole world your nakedness.God have mercy on u”.

“Don’t believe everything you hear.

There are always three sides to a story:

yours, theirs and the truth.”

Do you think Ahuofe was revealing too much for wearing that bikini?

The supposed photo is below.