Poverty – The Origin of Ghana’s Leading Trend, The... 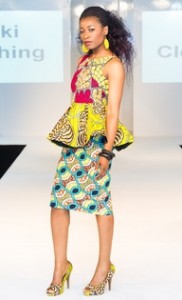 Back in the early 80’s and 90s,it was assumed that those who used Mixed African prints pieces to sew dresses(kaba,sleet,shirt) or the “NSAASAWA were considered to be poor folks who could’nt afford the full cloth thereby joining pieces to get enough cloth to sew a dress or a shirt. This lead to its abandonment and use totally.

Not until recently that it was invoked from its slumber as a results of the colour blocking movement which allowed different colours to be paired up contrary to the “combination” system. This paved way for different colours, shades and textiles (sometimes mixing lace with ankara material) of the prints to be pieced together and sewed into all sought of designs and still look extravagent.

Many African designers have also jumped on this patched mixed print patch clothing by creating,exploring and experimenting with it into various forms of dressess, pants, bags, skirt, hats, pillows, and not to mention boxer shorts lol.

However the trend may gradually loose grounds due to multiple cliche’s and overuse with less creativity, but for now view some lovely Nsaasawa fashion below.