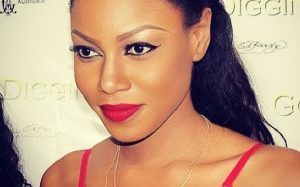 Yvonne Nelson was apparently feeling excited this morning as she shared this post with her fans on her Twitter page:

‘FOLLY premieres this Saturday 1st Nov in New York (empire cruise 23rd street) and Sunday 2nd in DC at (stonefish lounge) Come out and see this amazing movie…..come out lets interact and take some selfies. For more info on tickets call 3474792011 / 3472571796 @iamelizabethd.’

According to the movie’s Facebook page, the premiere will be a star-studded event to be hosted by Nosa Igbinosa and will be held at the top notch Empire Cruises’ HABOR YATCH located on East 23rd street & FDR Drive in New York City.

In more exciting news for those partaking in the premiere, the movie will be screened while the boat cruises around New York City Downtown.

The film, parading stars like Uche Jombo, Alexx Ekubo, Joseph Benjamin, Joke Silva, Elizabeth U. Daniels, Belinda Effah among others, was directed by Alex Mouth and produced by Elizabeth Daniels.

Focused on Rhoda, who seems to have a perfect life until recklessness turns her world upside down in what will become wasted years later in life, the movie puts the story of love gone sour on the front burner, highlighting the thin line between promises and betrayal.

But while it is exactly unclear how the project is connected to Yvonne Nelson, an actress and producer herself, it might not be unconnected with the friendship she shares with Daniels who is the producer of the movie.