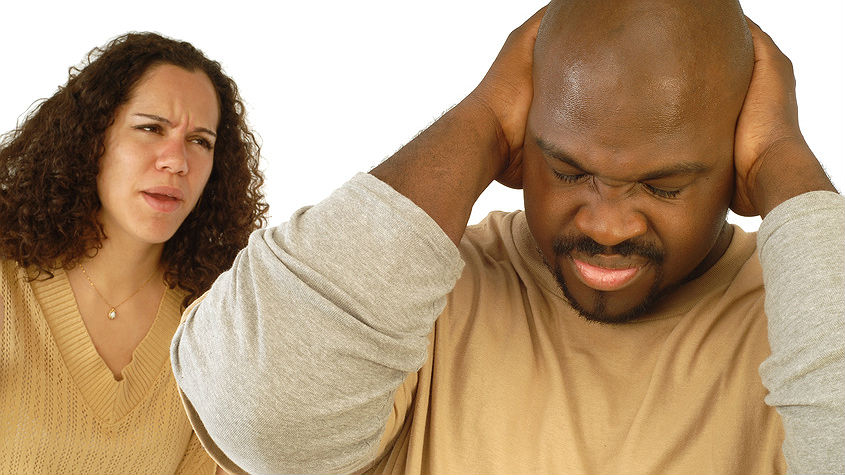 You often hear a wife complain, “My husband never listens to me.” Or a girlfriend agonize to her best mate, “My boyfriend never seems to pay any attention to what I tell him”. In fact, a woman was ranting about how she’s been talking about wedding arrangements to her fiancé for months, and yet when she asked him a few questions about some detail she’d told him about earlier, he hadn’t a clue what she was talking about! It left her wondering whether he had heard anything she had told him. The common grouse with women is, “Do men ever listen?”

TIP: Find out how you can make a man listen to you and be the woman he’ll always be in love with.

Ladies, you may have a point there, but have you ever stopped to think why that may be the case?Some of the common reasons men don’t listen to women are:

1. Women talk too much
Often women have so much to say that the pertinent facts get lost in the intricacies of the story. If a man has to listen to his girlfriend intersperse what’s there for dinner, with that cute top she saw at a store, how her sister is expecting a baby and she had a rotten day at work, he’s pretty unsure by the end of the saga, what exactly hit him.

2 They figure they’ve heard it all before
Sometimes men think there’s nothing new they have to hear and automatically tune off mid-sentence. According to them, it’s just old wine in a new bottle.

3. Women nag
One of the commonest complaints men have is that their partners often nag them. And since they’re used to the general trend of it, they don’t think there’s anything different about what they’re whining about.

4. They don’t like to be controlled
Men feel that if they listen to a woman in terms of following her instructions, it’s a sign that they are putty in her hands and that she’ll take undue advantage of the situation. Once he gives in to her demands, he’ll be the equivalent of a puppet on a string.

5. There are more pressing matters
If a woman is incessantly babbling in the background and a man is doing something far more important – at least to him – like watching a thrilling football match, the last thing he wants to do is turn off the television and tune in to his partner.

6. Some men just have a short attention span
Often, men cannot keep their focus on what a woman is saying for too long. They rarely have the patience to give women their listening ear for more than a certain fixed duration, which is normally about ten minutes at the most.

7. The topic is of little interest to them
And then, of course, if she insists on raving about the designer watch her boss’ wife was sporting or the chandelier earrings her friend’s rich boyfriend surprised her with, that’s really not something a man is interested in hearing.So, if you want your man to listen to you, a few pointers in the right direction.

Keep it short. Don’t meander on about every little insignificant thing, especially if you’ve noticed that he has no use for such frivolous details.

If you have to go into detail, make it interesting. Hold him rapt with a cute anecdote or a funny story that will grab his attention and hold him captive.

Keep pausing at suitable intervals just to ensure you have his attention. Avoid monologues and give him a chance to have his say too. Actively seek his opinion and ask him for relevant feedback, so that you know he’s not just physically present while his mind is elsewhere.

Stop being predictable and nagging him about the same stuff. If he hasn’t got the message by now, it’s time to change your stance or get him to move his butt by trying something new.

Don’t even try talking to him when he’s got the television on. Eliminate all distractions, or wait till he’s done with his television or newspaper, until you start having your say.

When you’re talking, try and get him to maintain eye contact with you. That way, if his mind wanders, you’ll know it by the glazed look in his eyes, unless of course he’s perfected the art of appearing that he’s listening to you with rapt attention, while he’s actually miles away.

And if you want him to listen and follow through on some instructions, don’t order him round. Ask him nicely, check to see if he’s comprehended what you’ve told him, and then act as if the ultimate decision rests with him.