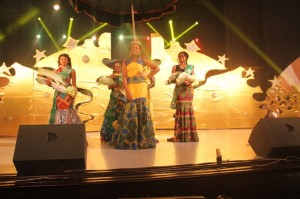 A graduate of the University of Development Studies (UDS), Wa Campus, Bentie Abigail Baciara, has been crowned winner of TV3’s Ghana’s Most Beautiful VIII.

Popularly known as Baci, the 22-year-old representing the Upper West Region was declared winner on Sunday, October 19 when the final show was held at the Accra International Conference Center.

She takes over the crown from Poka, who represented the Upper East Region last year.

For her prize, Baci drives home a Hyundai saloon car and receives a cheque for GH¢10,000 plus souvenirs from sponsors.

Prior to the finals, Baci had scooped the Best Performer Award of the 13-week show four times, putting her in a pole position to win the contest since the judges’ scores were cumulative, as explained by judge Linda Ampah during the final.

Notwithstanding, the fair damsel proved herself again on the night during the individual performances as she acted as a police officer who cracks down on drug abuse.

She also impressed the judges with the articulation of her answer during the questions section.

As part of her project, Baci is expected to help in the education of deprived children, a project she says will be undertaken by a team she will put together.